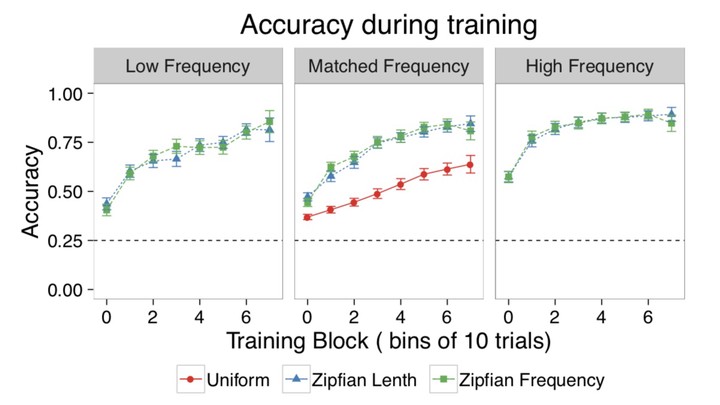 Both adults and children have shown impressive cross-situational word learning in which they leverage the statistics of word usage across many different scenes in order to isolate specific word meanings (e.g., Yu & Smith, 2007). However, relatively little is known about how this learning scales to real language. Some theoretical analyses suggest that when words follow a Zipfian distribution, as they do in natural language, it should be more difficult to learn a lexicon because of the many low-frequency words that are only observed a few times (Blythe, Smith, & Smith, 2010; Vogt, 2012). Although this effect can be mitigated somewhat by assuming mutual exclusivity (Reisenauer, Smith, & Blythe, 2013), no mathematical analyses suggest that learning in a Zipfian environment should be easier. In this work, we show the opposite of the predicted effect using cross-situational learning experiments with adults: when the distribution of words and meanings is Zipfian, learning is not impaired and is usually improved. Over a series of experiments, we provide evidence that this is because Zipfian distributions help people to disambiguate the meanings of the other words in the situation.